Yesterday and today I had the time of my life. And, really, that’s probably not a coincident given that my producer here in New Orleans, Donny Markowitz, actually wrote that song. For which he won an Oscar BTW, and yes, it’s this one… Donny told me that he never actually lifted up the statuette himself, but that he figured that everyone who’d since touched it has left a bit of their good energy in it. I like to think that I belong to that group.

Posing with my buddy, Oscar 🙂 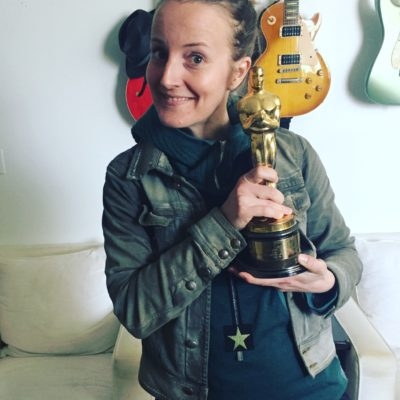 As I’m writing this, in eight short days I’ll be on my way to New Orleans, a place that’s been a home to me for over six years and to which I keep getting pulled back. The city has that sort of magical spell on you, as many people have expressed an agreement with to me. It seeps in and leaves you affected for life. Indeed, I’ve felt this exact effect, as I’ve ridden up and down the streets of the French Quarter on my cruiser bike greeting new, of which you make at least one a day, and old friends, while smelling the moist, warm air in between yummy restaurant odors and being overwhelmed by the explosion of colors and shapes of the charming surroundings.